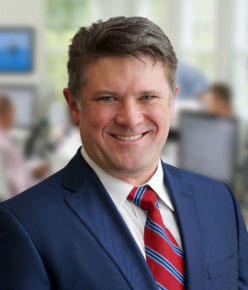 Jim has over 21
years of experience
in the shipping industry.

James (Jim) Hoy was appointed to the position of Commercial Director of Penfield Marine LLC in January 2017. He has over 21 years of experience in the shipping industry.

Prior to joining Penfield Marine, Jim was employed from 2008 until 2016 as a freight trader with Vitol in Houston, Texas. Vitol is a global energy and commodity trading company, which was founded in 1966, and trades over six million barrels of crude oil and oil products a day on a worldwide basis.

At Vitol, Jim was part of the Chartering team, which was responsible for mitigating trader risk and securing tonnage for physical deliveries.

Jim also worked at Heidenreich Marine (Heidmar) from 2000 to 2008. Jim started in operations, was promoted to the chartering department and then was transferred to Singapore in 2001 to cover the CPP and DPP markets in the Far East. Upon his return to US office at the end 2004, Jim took over as the Co-Chartering Manager for Star Tankers (a panamax tanker pool).

Jim began his career in 1995 with Alaska Tanker Company, sailing on the USWC as a cargo/navigation officer and working in the crude oil market.

Jim received a Bachelor of Science degree in Meteorology from SUNY Maritime College (Fort Schuyler) in 1995 and holds a U.S.C.G. Chief Mates license.