New Years Eve is a red letter day for the oil industry in the United States. 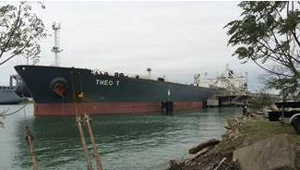 History is being made with the first export shipment of crude oil in more than 40 years.

And that historic event has a local connection.

Currently docked at the NuStar Energy terminal at the Port of Corpus Christi, the “Theo T” is carrying the first American crude oil export shipment in more than 40 years time. Commissioned by the Dutch company Vitol, the tanker is expected to leave at 3 pm CST on New Year’s Eve.

After a long public debate, the federal government lifted the ban on crude oil exports on Dec. 18.

Under the deal, Vitol will buy light sweet crude that ConocoPhillips extracts from the Eagle Ford Shale, a vast oil-rich region just south of San Antonio.

ConocoPhillips will be shipping crude oil via pipeline to a terminal owned by San Antonio-based NuStar Energy in the Port of Corpus Christi.

A tanker named the “Theo T” has been fully loaded with what is being called the first American crude oil export shipment in more than 40 years. Both NuStar (NYSE: NS) and Port of Corpus Christi officials reported that the Theo-T was scheduled to set sail at 3 p.m. on Dec. 31.

The tanker’s destination has not yet been revealed, but maritime records show that the “Theo T” is based out of the Bahamas and arrived at the Port of Corpus Christi the evening of Dec. 29.