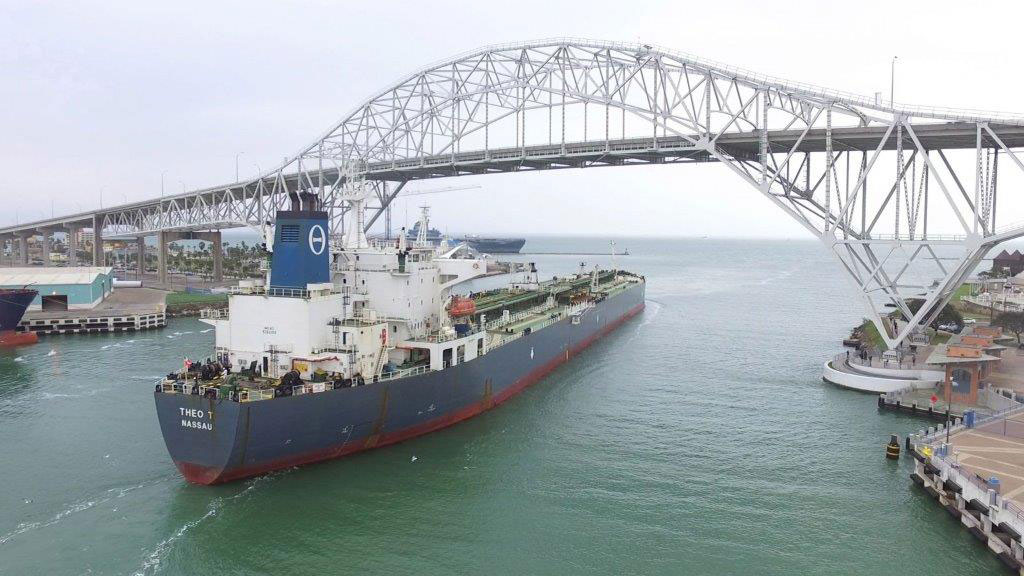 MT Theo in the News

The worst fears of OPEC and Asian gas exporters are about to come true. U.S. shale drillers who pushed domestic crude production to a 45-year high and unlocked record amounts of natural gas are letting those supplies loose into global markets they were absent from for decades. The tanker of shale oil that shoved off from a Texas port on New Year’s Eve and a shipment of liquefied natural gas that’s prepared to set sail later this month will inaugurate a new era of competition among the world’s largest energy producers.

With the Organization of Petroleum Exporting Countries already pumping all-out to undercut rivals and hold tight to market share, lead member Saudi Arabia must now contend with additional pressure from U.S. oil producers, who collectively vaulted to No. 3 in the world. Meanwhile, voracious importers of natural gas from Japan to Spain now have an alternative source of supply in a global market long dominated by just three nations: Qatar, Malaysia and Australia.

“Who would have thought we would be exporting both oil and LNG in the same month?” said Phil Flynn, senior market analyst at Price Futures Group in Chicago. “Fracking has changed the world.”

Thanks to innovations in horizontal drilling to reach farther across oil and gas fields, and in fracking, which uses high-pressure jets of water and sand to crack oil and gas-soaked rocks, shale producers have become the biggest contributors to an unprecedented surge in U.S. energy output.

The exports mark a reversal from the end of the last century, when domestic oil and gas production was dwindling and North America feared running out of energy supplies, leaving the continent at the mercy of resource-rich nations such as Russia, Iraq and Saudi Arabia.

A flood of investment in the past decade by domestic and international drillers eager to get in on shale’s promise triggered such a tidal wave of new supplies that prices have crashed. The bust has forced debt-laden producers to slash jobs, halt dividend payouts, auction off assets and abandon exploration projects.

ConocoPhillips, the third-largest U.S. oil company by market value, was first to supply shale oil to an overseas buyer after the 40-year ban on such sales was lifted on Dec. 18. The Houston-based company was the source of the crude and condensate that Swiss trading house Vital Group shipped from the Texas port of Corpus Christi to Italy on Dec. 31. A second shipment for Vitol is scheduled to depart Houston within days.

Cheniere Energy Corp. has begun liquefying gas at its Sabine Pass terminal in southwest Louisiana and is “on schedule” to ship the first cargo of U.S. shale gas into the global market this month, Richard Ennis, head of natural resources at ING Capital LLC, which provided financing for the project, said in a Dec. 30 e-mail.

Cheniere is starting up the first of six planned liquefaction plants at the facility, where the fuel is super- cooled and then compressed to 1/600th of its volume so it can be loaded onto tankers. By the end of 2018, when the Sabine Pass project is fully operational, it will be able to export 3.5 billion cubic feet a day.

The first LNG being produced at Sabine Pass is “historic” for the U.S. gas market, Flynn said.

“It wasn’t too many years ago that Alan Greenspan was saying the biggest threat to the U.S. economy was our inability to import LNG, and now we are going to be an exporter,” Flynn said.

The U.S. is poised to become a net exporter of gas by 2017 thanks to shale fields, and to become the world’s third-largest supplier by 2020, according to the Energy Information Administration and International Energy Agency estimates. Output will climb this year to a record for the sixth straight year, rising 1.8 percent to 81.05 billion cubic feet a day from 2015 levels, EIA data show.

Meanwhile, OPEC members also continue to crank up production. Output from the member nations rose by 18,000 barrels to 32.139 million a day in December, according to a Bloomberg survey of oil companies, producers and analysts. The group has pumped more than 30 million barrels a day for 19 months, and last month agreed to abandon its usual production target in a bid to lock in market share.