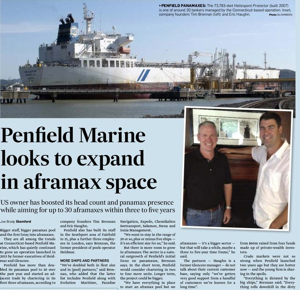 They are all among the trends at Connecticut-based Penfield Marine, which has quietly continue to grow an operation launched in 2013 by former executives of Heidmar and Glencore.

Penfield has more than doubled its panamax pool to 20 over the past year and started an adjacent trade by chartering in its first three aframaxes, according to company founders Tim Brennan and Eric Haughn.

Penfield also has built its staff in the Southport area of Fairfield to 15, plus a further three employees in London, says Brennan, the former president of pools operator Heidmar.

“We want to stay in the range of 20 or so, plus or minus five ships — it’s an efficient size for us,” he said.

But there is more room to grow in aframaxes. The sector is a natural outgrowht of Penfield’s initial focus on panamaxes, Brennan says. In the short term, Penfield would consier chartering in two to four more units. Longer term, the project could be bigger.

“We have everything in place to start an aframax pool but we would have to find the right partner,” he said. “We’ve started to focus there because we want to add value to the current fleet, and there are quite a bit of synergies.”

Many of Penfield’s panamax customers also have aframaxes, Brennan notes.

We can see having 20 to 30 aframaxes — it's a bigger sector — but that will take a while, maybe a three to five-year time frame,” he said.

The partners — Haughn is a former Glencore manager — do not talk about their current customer base, saying only “we’ve gotten very good support from a handful of customers we’ve known for a long time.”

Penfield has established a contract-of-affreightment with what Brennan will describe only as “a major oil company”. Brokers say Penfield is linked with ExxonMobil.

About half of Penfield’s fleet comes from vessels it has chartered in. Its working capital comes from $60m raised from four funds made up of private-wealth investors.

Crude markets were not so strong when Penfield launched two years ago, but they are hotter now — and the young firm is sharing in the spoils.

US exports add to an oversupply of crude in the Atlantic Basin and are likely to exert further downward pressure on oil prices there, Knowles says. While near-term factors would not appear to dictate a big trade in US Gulf exports, the impact on tanker tonne miles remains to be seen, he adds.

Everything is dictated by the big ships,” Brennan said. “Everything rolls downhill in the dirty market, and we're at the bottom of the hill.

We’re confident in the next one to two years for the crude market. After that, who knows? There’s a lot of tonnage coming in. We’re seeing fleet growth and conversions from dry cargo. I feel good about 2015 and 2015 but after that it’s concerning to take long-term time charters.”

Penfield may need to take its chances anyway, he acknowledges.

“We’re the new kid on the block, though I don’t know if I look that wy with white hair. We have to pay our dues to some extent. We almost have to step out longer to take in ships. We have to hope to make enough at the front end to cover the back end,” said Brennan.

However that plays out, the partners do not see expansion beyond the core panamax-aframax focus.

“Our long-term business plan is to expand on the aframax side and stick with what we’re good at,” he said. “We’re not looking to grow in every direction just for the sake of growing.”.