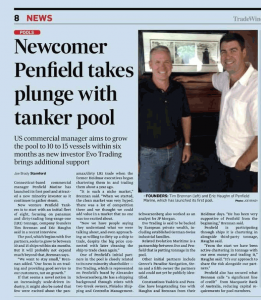 New venture Penfield Tankers is to start with an initial fleet of eight, focusing on panamax and dirty-trading LR1 tonnage, company founders Tim Brennan and Eric Haughn said in a recent interview.

We want to stay small. Our focus is on trading and providing a good service” says Brennan.

The pool, which begins with five partners, seeks to grow to between 10 to 15 ships within six months. But it will probably not expand much beyond that, Brennan says. “We want to stay small,” Brennan added. “Our focus is on trading and providing a good service to our customers, not on growth.”

If that seems a novel notion in an increasingly scale-driven industry, it might also be noted that few were excited about the panamax/dirty LR1 trade when the former Heidmar executives began chartering them in and trading them about a year ago.

“It is such a niche market,” Brennan said. “When we started, the clean market was very hyped. There was a lot of competition out there and we thought we could add value in a market that no one was too excited about.”

“Now we have people saying they understand what we were talking about, and even approaching us willing to dirty up a ship to trade, despite the big price connected with later cleaning the ship to trade clean again.”

One of Penfield’s initial partners in the pool is closely related to its new minority shareholder — Evo Trading. Evo Trading is represented on Penfield’s board by Alexander Schwarzenberg. He has a shipping background through stints with two Greek owners, Pleiades Shipping and Centrofin Management. Schwarzenberg also worked as an analyst for JP Morgan.

Evo Trading is said to be backed by European private wealth, including established German-Swiss industrial families. Related Evolution Maritime is a partnership between Evo and Penfield that is putting tonnage in the pool.

Other initial partners include Greece’s Paradise Navigation, Stena and a fifth owner the partners said could not yet be publicly identified.

Constantinos Tsakiris and Paradise have longstanding ties with Haughn and Brennan from their Heidmar days. “He has been very supportive of Penfield from the beginning,” Brennan said.

Penfield is participating through ships it is chartering in alongside third-party tonnage, Haughn said.

“From the start we have been active in chartering in tonnage with our own money and tradiing it,” Haugn said. “It’s our approach to share the risk alongside our partners.”

Penfield has also secured what Brennan calls “a significant line of credit” from Macquarie Bank of Australia, reducing capital requirements for pool members.